Skip to content
Posted on 11/04/2013 by Nemulisse
One of the more relevant characteristic of a country like Italy is that this is a country for old people. What I mean is that, usually speaking, everything it is necessary to do, in every field of job, it is very difficult that the person in charge of a particular duty is young. This happens for two reasons: first because who must decide to whom give the responsability to do things usually says that young people haven’t a big experience in a particular field, and this is true, in part; second because our country is a place where nobody want to give the same opportunities that he or she has had in the past to demonstrate his or her value: everyone is very jelous of his power and doesn’t give opportunities to other people to have the same. This means that Italy is a place for old people and without a future! Nothing will change in this country until the moment in which a change of generation will start at all the levels into society. This is the main reason why I usually say that this is a dead country. The new Parlamentary party called “5 stars movement” is a small hope in this sense. The majority of those people are young and haven’t been in Politics before. Maybe they haven’t a great political experience, but who has one at the beginning? Maybe they are influenced from somebody else (could be the Comedian Beppe Grillo or the mass media manager Gianroberto Casaleggio), nevertheless they represent the only new thing into the very poor landscape of Politics in Italy. It’s a small germ and it should be allow to it to grow up with it’s own legs, maybe making mistakes too, but it could represent the beginning of a new Era in a land of zombies.  I have great expectations! We will see. 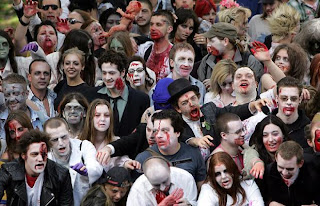