Skip to content
Posted on 11/07/2012 by Nemulisse
Which is the role of Philosophy during the Crisis time? There has been a vacuum of sense during the last 40 years, more or less. Since the fall of the Berlin Wall the sense of the future of humanity changed completely. It is during the periods of strong changings that Philosophy has its peculiar meaning, giving the roots and the paths for the changing itself. It isn’t a good path leave Economy and  Finance drawing the line on which the world should move on. It would be as to leave the child choosing by himself what he has to study! Duty of Philosophy is to understand what are the problems that come out from the Society, understand the right solutions to those problems, looking to all the possibilities that the development of new needs and ideas come up from the Society itself. One example is “Occupy Wall Street”. Going beyond the ideas that they have, what should be more interesting for Philosophy is the boost to the need of changing. The re-thinking of the idea of Society that we want for our future: the rules that we have now are those that few people decide to give us, without asking if we agreed (obviously). Can we question those rules? Can we imagine a world founded upon other kind of roots? Yes, we can! Philosophy should legitimize a new way for Politics to get possession again of his role into Society, that role that it has given to Finance for a long time. All the movements of protest all over the world are a good point of starting for a new start, even for thinking. 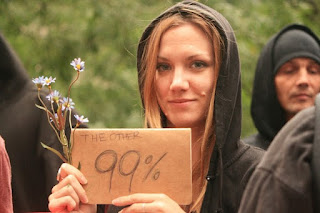