Skip to content
Posted on 10/09/2012 by Nemulisse
During the period between 1788 and 1799 one of the most important facts of human history took place: the French Revolution. The absolute monarchy collapsed and the new Age of Enlightenment, of principles of equality, citizenship and inalienable rights replaced Monarchy, Aristocracy and religious Authority. All these things happened almost at the same time of the other great Revolution, the American, on the other side of Atlantic Ocean. After the interview that the french President, François Hollande, gave on tv yesterday, during wich he confirmed the taxation on huge economic patrimonies, the patriotic spirit of French people took a new lease of life and the frontpage of the national newspaper Libération is just an example of the new air that is possible to breathe in France. I personally hope that this wind could blowing in the air for a long time. It’s a matter of civilization, now as in the past. I have always admired the French national proud and their capability to be united when must fight for the Rights, and this is a war between common people and a small oligarchy of financiers. This good wind should blow in Greece, first of all, after here in Italy and in Spain, in Ireland and in Portugal and so on. And if it will blow in a strong way could be that it will be as strong as to reach the other side of the Atlantic Ocean, joining together with the wind that is blowing now in USA, the wind of Occupy Wall Street. Historia Magistra Vitae, Cicero said in the second book of “On the Orator”. Let’s come back to study the Classics: they have already said everything in the best way! 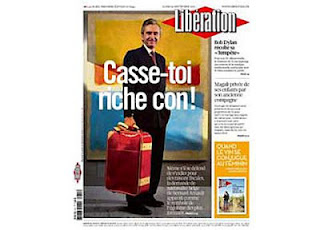