Skip to content
Posted on 19/07/2012 by Nemulisse
More than once I’ve written about the new economic system that controls our world today: the Financial system. Common people don’t know what terms like CDS (Credit Default Swap) rather than Libor (London Inter-Banking Offered Rate) or Euribor (the same for the EU area) mean, however these terms are very important for each of our lives, even if we don’t know them. Trying to summarize the Libor rate is the price with which Banks borrow money from other Banks and this rate is established in the declaration of 16 Banks (40 for Euribor) to the British Bankers’ Association who publish daily the medium rate calculated on the basis of these declarations. Many other financial products depend on this medium rate, even the rate of our loans, and the lower rate of the Libor (Euribor) doesn’t mean a better rate for our loans. The lower the rate of Libor, the more the Banks seem to be healthy and can sell their products (many of which are toxic) to the general public, so (since the end of 2007) they decided to manipulate the real rate and have deceived millions of people all over the world, for massive profit. One other important thing to know is that the Federal Reserve in USA and the BCE in Europe discovered this trap and when the Crisis blew up all the Governments decided to save those Banks instead of saving their peoples from them (they said because the Banks were too big to let them fail, good excuse, but untrue!). All of them are guilty, guilty of having lied, guilty of having let things go on this direction, guilty of having decided to make the people suffer for their culpability. However the most guilty of all are the people: all of us are guilty of letting them continue exploiting us. Our duty is to inform ourselves, to become conscious about these facts and to react. We have all we need to do it. We should wake up and drive our own lives forward ianother direction: it’s up to us and if we don’t do it this will be the real scandal.
For further information about this topic see this in Italian and this in English 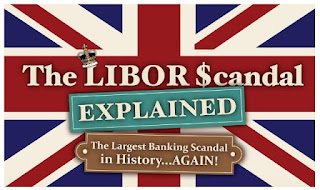