Skip to content
Posted on 21/05/2012 by Nemulisse
The summit of Camp David is over. What did come from that? A wonderful view over the future, over nothing! The final picture taken is that of the german Chancellor, Angela Merkel, isolated from the others, but on the other side of the picture we have the leaders of France, Italy and Usa and the otheres who haven’t ideas for escaping from the crisis. It is clear that Germany will must accept the euro bonds because the other economies can’t accept it’s economic expansion against their grow, no longer. However nobody considered the voices of all those people that were outside, on the street, shouting against banks and against the high Finance: the people of “Occupy Wall street”.To be more realistics we can say that the Finance itself, that get together in the summit, pretended to not listen to those voices that came from the street. It’s more realistic to say that these meetings are just for the media world. For this reason is very important to support “occupy Wall Street”, because just from this kind of movement the political awareness of people can comes out, all over the world. Only from people this kind of things can change, on the contrary there isn’t a way to escape from this situation. People has the power, but just if they are togheter and if they don’t give up. 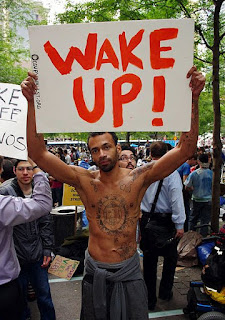