Skip to content
Posted on 05/07/2012 by Nemulisse
On July 2001, during the night between the 21st and the 22nd, more than 346 cops and 149 Carabinieri beat with a furious violence about 158 people who were in Genoa to support the anti global movment during the G8 meeting. The expression that the officer in charge of the police force, Michelangelo Fournier, used to describe what he saw when he arrived at the Diaz school was “Mexican butchery”. Today the Court of Cassazione (the Italian Supreme Court) has confirmed that the officers Giovanni Luperi, Francesco Gratteri, Vincenzo Canterini and some others were, along with their soldiers, guilty as charged. However nobody will be imprisoned, they will be just suspended from their jobs, because the time period for trying the case under Italian law has expired! Yes, expired like milk or something to eat! Only in Italy something like this could happen, not in other parts of the civil world. Amnesty International said that people who were arrested after the crime in the Diaz school were injured with huge brutality. Justice is done! Or maybe not…
For further information about this topic have a look here or here in italian. 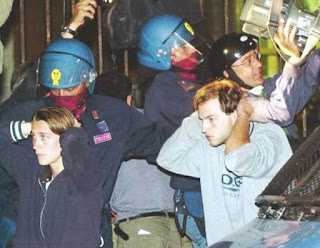